A MAJOR INVENTOR OF PHOTOGRAPHY

International colloquium DUCOS DU HAURON at the theater of Agen on September 10 and 11, 2021

Scientists and inventors at the time of Louis Ducos du Hauron were, for the most part, people like Pic de la Mirandole
coupled with Gyro Gearloose. They were interested in all the sciences and all art forms.

Louis Ducos du Hauron who was little known in his time, in the late XIX century, and nowadays still, although an Agen school is named after him, is the inventor of colour photography, of 3D image, of the first slide and the forerunner of the moving image, the future cinematograph, 30 years before the Lumière brothers who used his patent.

He lived in Agen; he died and was buried there. He pioneered modern photography since his three-colour process is the basis of today’s digital photography.

The multidisciplinary scientists’ team of the Synchrotron in Grenoble has just restored a scientist whose good name, in 2018. They studied his photographs using innovative technologies, defining the various chemical components he used to reproduce colours. A big first! In so doing, they brought recognition to this genius inventor and the exclusive inventor-ship of the very first polychrome picture, named fluorochrome that the Americans and the English had tried to take away from him.

This Website’s only purpose is to bring back to the limelight Louis Ducos du Hauron from Agen who precisely spent his life mastering light.

In 3 minutes, and about 15 shots, focus on Louis Ducos du Hauron’s life and inventions. 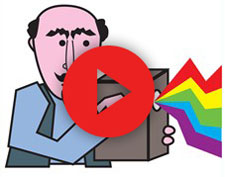 Latest news from the association